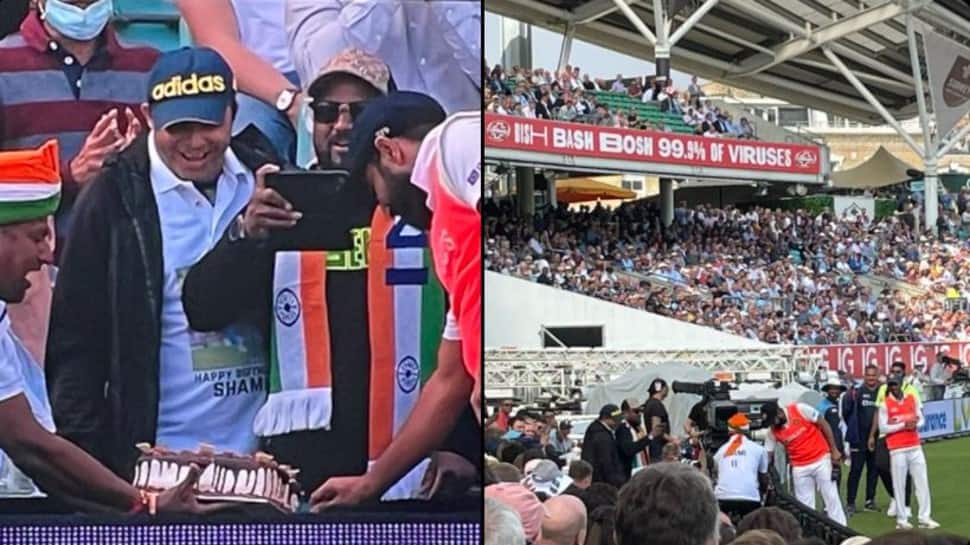 India pacer Mohammed Shami may have been ruled out of the ongoing fourth Test between India and England, but fans at the Oval on day two ensured that he remained in the limelight for a moment.

The right-arm pacer, who was ruled out of the ongoing Test due to a swallow, celebrated his 31st birthday on friday And a section of the crowd of Indian fans celebrated it with a cake.

Fans asked Shami to cut the cake, to which the fast bowler obliged.

Nice gesture from Shami, cutting the cake as he celebrated his birthday with an Indian fan in the field. pic.twitter.com/t2k5iC26a1

The right-handed batsman has played the first three Tests of the series and has taken 11 wickets. His best performance of the series – 4/95 – came in the third Test at Headingley in Leeds.

He also took four wickets – 4/76 – in the World Test Championship final against New Zealand in June.

He is just five wickets short of completing 200 Test wickets. If he does so, he will be the fifth Indian fast bowler to achieve this feat.

Meanwhile, Indian bowlers bundled out England for 290 in their first innings as the hosts took a 99-run lead in the fourth Test against India at the Kennington Oval on Friday.

Things were looking bad in the morning session when they were struggling at 62/5 but the middle and lower middle order batsmen made some useful partnerships to help England bounce back from that position.

Ollie Pope and Chris Woakes wielded caution with aggression as they contributed a crucial 50. The last wicket stand escalated things for a while compared to Virat Kohli and his soldiers.

Initially, it was the partnership between Jonny Bairstow and Pope that stabilized the ship, and then it was the contributions of Pope and Woakes that helped England take close to 100 runs.

Thakur took the most important wicket of Pope followed by Ravindra Jadeja bowling Ollie Robinson (5). Pope returned to the pavilion after scoring 81. Woakes stepped up again and scored 50 before being run out.

Out of action, Daniel Jarvis – also known as Jarvoo 69 – attacked the pitch again on the second day of the ongoing Fourth Test. The incident happened during the 34th over of England’s innings which was bowled by Umesh Yadav and the match had to be stopped for five minutes.