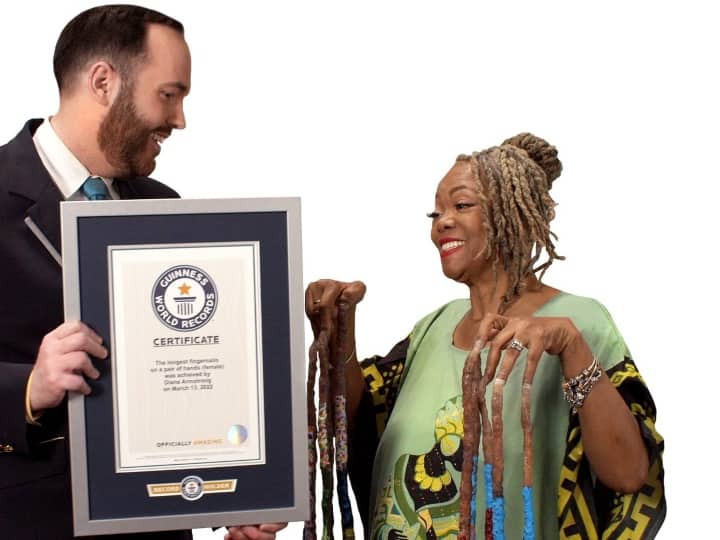 US Woman Guinness World Record: There has been a craze among people all over the world to make different types of records. A similar record has been made by a US woman. An American woman named Diana Armstrong has set the record for having the longest nails. The Guinness World Record had announced about this on Tuesday.

According to the Guinness World Records, Diana, who hails from Minnesota, America, also holds the record for the woman with the longest nails in both hands. According to the Guinness World Records, the length of the nails of both hands of American woman Diana Armstrong has become about 42 feet. It is being told that this woman has not cut her nails for 25 years.

World record for having longest nails

Diana Armstrong, a resident of Minnesota, USA, is about 63 years old. This woman had set the record for having the longest nails in the month of March this year. She had been growing her nails for the last 25 years. It is being told that this woman named Diana had cut her nail for the last time in the year 1997. According to the New York Post, Diana claims that the total length of her nails is more than a normal bus.

Do not cut nails in memory of daughter!

There is also a sad story behind the not cutting nails of an American woman named Diana Armstrong. Actually, Diana had a 16-year-old daughter, who lost her life due to asthma. Diana said that her daughter used to cut her nails every week. Diana has not cut nails in the memory of her daughter for 25 years and now her name is recorded in the Guinness World Record.

US Vs Russia: US basketball star jailed for 9 years in Russia, US President Joe Biden said – this is unacceptable

Viral Video: A heart-touching video came out in the midst of the Russia-Ukraine world war, seeing that you will also say – if you love, then what to fear

If China did not agree, Taiwan also started military exercises, imposed on the dragon to ‘prepare for attack’

Space Environment: 35 explosions on the surface of the Sun in two weeks, what does it mean

Amrit Festival of Independence will be celebrated in Boston city of America, know what are the special preparations

Why is International Day of Democracy celebrated? Learn History and...